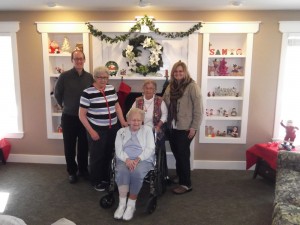 Sue McConn, vice president of Otterbein Skilled Nursing & Rehab Neighborhoods, met Moody at the Leading Age conference this fall and extended to him an invitation from herself and Hreben to see one of Otterbein’s five small house neighborhoods.

“With the state’s budget challenges and the effects of the budget on Medicaid reimbursement, we felt it would be good for the governor or his representative to see how operationally efficient the houses are and to experience firsthand the quality of life of the elders living in the neighborhood,” McConn said.

Small house neighborhoods are made up of five homes, each with 10 residents in private suites. These small houses combine the warmth and companionship of home with all of the skilled clinical nursing care services in a residential setting. The design of the small houses and their location within a neighborhood makes the transition for elders easier. Both elders and staff appreciate key differences such as no institutional schedules, meals or routines; smaller scale environments; high elder assistant staffing ratios; and home cooked meals.

Ohio Gov. John Kasich’s passionate mission is to make Ohio one of the most forward looking and reform-oriented states in America.

Ohio has the largest number of small house neighborhoods in the United States. In addition to Springboro, Otterbein has locations in Maineville, Middletown, Monclova and Perrysburg.
McConn said, “This model is without a doubt forward looking and reform oriented. It is a change from an institutional model of elder care to elder-centered, elder-driven skilled nursing care.”

Jones and Moody met five residents at Otterbein’s small house neighborhood in Springboro. The discussion centered mostly on what it is like to live in the houses, why they chose Otterbein, if they had opportunities to get out to various events, etc. McConn said one elder shared that she had been in another nursing home prior to moving to Springboro and it had been “awful.” She had to share a room, everyone told her what to do and she was not happy. She told Moody and Jones that at Otterbein she has her own room, the other elders in the house are like family – “like my sisters,” and that she loves her home.

“My thought was that he was truly impressed,” McConn said, “not just with the physical environment, or the true sense of family he saw, but with the financial operational efficiency of the model. We were able to share the capital costs of the projects and suggested that more such neighborhoods could be built if the state were willing to give some concessions.”

McConn said the small house model can and will change the way care is delivered to older Ohioans and can be cost effective, but providers need help in order to access capital for these projects. She also explained that building codes which were developed for institutional nursing homes do not apply to these small house developments and need to be changed. This model can work financially for not-for-profit and for-profit providers, she noted.

The Cincinnati Enquirer recently ran an article about a bill authored by Jones to boost the quality of Ohio’s nursing homes and also make them homier, which is on the fast track for approval by state legislators and would tie higher reimbursements to 20 new quality measures. The article said, “Otterbein Senior Lifestyle Choices exemplifies how nursing homes can be made more resident friendly.” In that same article, Moody referenced his experience at Springboro, comparing Otterbein small houses to condos and calling them “incredible.”

Otterbein Senior Lifestyle Choices, founded in 1912, is a non-profit health and human service ministry, serving nearly 2,000 people, and is related to the East Ohio and West Ohio Conferences of the United Methodist Church. Otterbein has five full-service retirement communities, five skilled nursing and rehabilitation neighborhoods and a home health agency.