Rosecrance has published a new prevention education booklet aimed at teens that includes real-life feedback from young people in recovery for drug and alcohol abuse.
The publication is called “Been There: Teens in Recovery Tell It Like It Is.” It’s designed in the style of a “zine,” a popular format for original artwork and text, and was illustrated by Christine Nicholson, experiential therapies supervisor at the Rosecrance Griffin Williamson Adolescent Treatment Campus.

“Been There” was compiled from interviews with teens living at Rosecrance’s Rockford recovery homes – Marlowe House and Hillman House. The teens discussed common statements they made while they were using – such as “Weed isn’t even addictive” and “I only drink or use on the weekends” – and offered answers that they hope with resonate with teens today and prevent them from ever knowing the pain of addiction. 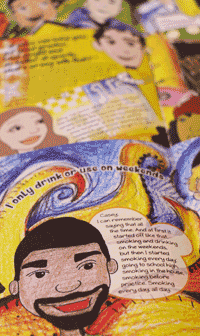 “I can stop anytime I want.”

Kevin: I’ve said those exact words a thousand times and would even tell myself and convince myself that I could control it and then try to stop. And then in the next few hours, I was getting high.

Shannon: I always told everybody that I could stop whenever I wanted to. I just didn’t want to. And I don’t think I ever did want to on my own until it got really bad, and then I wanted to stop but couldn’t.

The booklet also includes references to marijuana and “harder drugs” such as heroin at a crucial time when teens are getting mixed messages about the legalization of marijuana and heroin overdoses have become an epidemic across the country. It’s paired with two other publications Rosecrance produced last year that help parents talk to their kids about substance use: “Teens & Weed: Still a Big Deal” and “Teens & DXM.”

“Been There” will be offered as an educational tool in schools and other venues across the region. It’s also available for download through rosecrance.org/been-there.